Skip to content
They couldn’t just leave it alone. The one great love of my life. Okay, fine, one of the many great loves of my life.

It’s more than a refreshing drink. It’s a way of life. And now, it’s screwed.

See, I think you can tell a lot about a person from their beverage of choice. Tea. Coffee. Banana milkshake. Whatever. (The beverage of choice, in this case, means what you want to have in your mouth immediately after the toothpaste is rinsed off.)

Tea drinkers, for instance, are completely different from coffee connoisseurs. Tea drinkers are people who fall into extremes. Like the drink itself, you can find a tea lover gulping down a hot cutting at the corner thela or sipping a warm Darjeeling out of a bone-china cup, their little finger delicately pointing outwards. (Tea may be the common man’s drink, but my, can you be snooty with it.)

Even among coffee drinkers, you’ll find the latte lads and lasses a little different from the cappuccino chaps and chicas. Espresso, mocha, columbian, morroccoan – they all have takers, who differ from each other in small yet significant ways. But on the whole, coffee drinkers are working people, mostly. (And in this class I do not include people who visit Barista and sit there for hours over an iced cafe mocha, discussing the latest Shah Rukh flick.)

No, coffee lovers are people who look fondly to the drink everyday, to help them reach the other side of the afternoon. Who turn to it like fanatic priests turning to God, when drooping eyelids threaten to slow down or stop late nights at work. Coffee drinkers mean business. And all the hazelnut flavouring in the world can’t change that.

Not so very long ago, going out for coffee meant exactly that. Going out for coffee. Catching up with friends. Discussing your life, your job, your utter dissatisfaction with either or both, or politics, the new burlesque show in town, and often the deep resemblance of the last two to each other.

But then, along came a movie called Pyar Ke Side Effects. Which declared that when a woman asks a guy out for coffee, she wants to have sex with him. Not caffeine, not conversation that’ll hopefully not make her choke on her own tonsils, but sex. 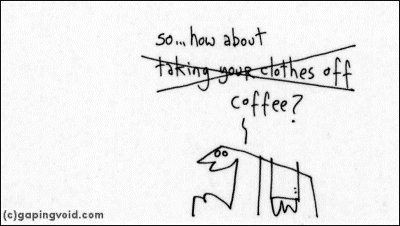 If the day comes when “Please pass me the stapler” is read as “Let’s do it in the corner cubicle”, you know whom to blame.

One thought on “Brew You”