September:
Start mentioning how you need to do something for the awards in everyday conversations.

November:
Realise that faffing over chai and sutta does not qualify as “brainstorming”.

December:
Run around getting last-minute idea executed, getting it approved from very annoyed boss and even more annoyed CD, pulling in favours from little-known photographers, pulling in friends, family and countrymen as models, getting servicing to sell it to a very unwilling client, cursing servicing and selling it yourself, pleading with media to release it, running around getting “evidence” that it was released in the first place and getting very, very fucked in the process.

Oh, and in related news, I firmly believe Scott Adams worked in advertising. 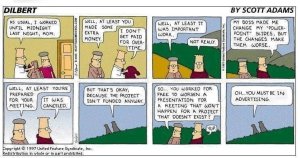