Skip to content
Yes, I know, you’ve been wanting a post for a while (well, at least R has and he’s not been subtle about it). Something mean and funny and insightful and sarcastic. This is not that post. Well, it is kind of. But it’s also special, because it’s about an issue that’s close to my heart. And my ego.

This post is about plagiarism.
Except this time, it’s not of words, but images.
My Facebook profile picture, to be precise.

A few weeks ago, I got a ping from Smiley telling me some random chick on Facebook was using one of the pictures I’d clicked of myself, as her profile picture. Now this is such a damn ridiculous thing, even as a concept, that it made me go “Huh?”. It’s a damn good picture of me – it shows my silhouette outlined against a glass cabin door. The effect is this: 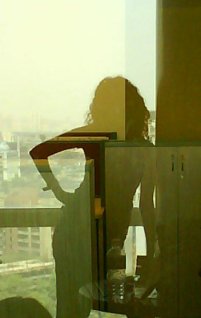 Anyway, so this woman has obviously saved this picture from my FB album and is merrily using it as hers.

Now, allowing for the fact that she didn’t realise what a gross invasion of privacy and all things normal her little action is, I sent her this little private message on FB:

“Hi, Guess who? It’s me, the girl whose picture you’ve happily put up as your profile pic, without so much as a by-your-leave. Care to explain yourself?”

I didn’t get a reply but the next time I checked, her profile picture space was empty.

Ah well, I thought, and carried on with my spectacularly eventful (okay, not so much) life.

But then, this week I get texts from TWO different friends saying the girl’s put up the damn picture again. One of them happens to know someone who knows this girl. That person tells us that she is just a 20-something kid.

At which age I believe you’re old enough to understand that you shouldn’t take what’s not yours. Especially when you’ve been told not to.

So Mithila Desai, since you obviously didn’t take the hint with a private message, I’m going to break my ‘no-names’ rule on this blog for a second time.

Take that picture down. Or face the wrath of the internet.